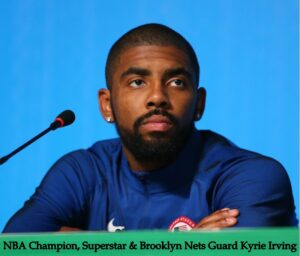 Athletes for Justice and Change: NBA Must Not Let Season’s Return Distract from the Black Lives Matter Movement

Players are concerned that their season’s return will become the distraction that takes away from the current social justice movement. Adam Silver, NBA Commissioner, must not overlook these legitimate anxieties.
During a conference call among 80-plus NBA players before the restart of the 2020 NBA season, led by Brooklyn Nets guard Kyrie Irving, according to a player on the call, Irving came out strongly against going to Orlando to resume the season. Irving’s position: NBA players should not become the distraction that takes away from the social justice movement that has swept through the US in the aftermath of the killing of George Floyd. We at Diversity, Inclusion & Equality (D.I.E.), supports Kyrie’s position, like Muhammed Ali, sacrifices must be made, career ones also.

Employers, business owners, renters, and others that fail to understand the importance of diversity, inclusion, and equality, risk stiff penalties, fines, and/or lawsuits against them and/or their business. For years, people of color have been denied access to quality jobs, business funding, and more, due to discrimination. Studies showed that even when hired for similar positions as their white counterparts, people of color were often paid lower salaries for the same jobs and were not promoted to higher positions with the same frequency as their white counterparts. This recurring problem, and other similar concerns, support the ongoing need for the Diversity, Inclusion, and Equality Movement. The recent resurgence of Black Lives Matter groups and strong global protests against racism and injustice following the murder of an unarmed Black man, George Floyd, by former Minneapolis, Minnesota police officers, has refueled the movement.

Black athletes and celebrities are speaking up and lending their influence to keep the momentum going and push for social reform. Championship basketball player, Kyrie Irving, of the Brooklyn Nets, who reportedly has a net worth of $70 million, is pleading with players to stand against the restart of the 2019-2020 National Basketball Association season. The NBA season is tentatively scheduled to restart on July 31, 2020. However, Irving is taking a stand to speak out against racial injustices in the greater community, racism within the National Basketball Association, amongst other things. Despite awareness of possible income loss and disagreement amongst some fellow players regarding his decision, Kyrie Irving continued to urge other NBA players not to play, to focus on pushing for social justice reform in the greater community and equality within the National Basketball Association.

“I don’t support going into Orlando,” he reportedly said on the June call. “I’m not with the systematic racism and the bulls–t.” Irving is putting his money where his mouth is. The Brooklyn Nets star Kyrie Irving has committed $1.5 million to help support the income of WNBA players who have chosen to opt out of their 2020 season, according to Brian Mahoney of the Associated Press.

“Whether a person decided to fight for social justice, play basketball, focus on physical or mental health, or simply connect with their families, this initiative can hopefully support their priorities and decisions,” Irving said in a statement.

The donation will be part of the KAI Empowerment Initiative created by Irving that will also provide WNBA players with a “comprehensive financial literacy program.”

We at Diversity, Inclusion & Equality (D.I.E.), supports Kyrie’s position, like Muhammed Ali, sacrifices must be made, career ones also.

On the other hand, Knicks owner and CEO of Madison Square Garden, James Dolan, was criticized for not taking a stand and refusing to speak out against the killing of George Floyd.  Dolan released an email to Madison Square Garden employees, following the killing of George Floyd, that his company was “not any more qualified than anyone else to offer our opinion on social matters.”  According to reports, Dolan’s email came a day after Adam Silver, Commissioner of the National Basketball Association, released his statement to players, coaches, team owners, and executives at all levels, speaking out against George Floyd’s killing and demanding justice.  After much criticism, Dolan followed-up his initial remarks with an internal memo to staff, insisting that he is not a racist and condemning racism.  Long-time Knicks super fan, Director, Producer, and Actor – Spike Lee, was one of those concerned about Dolan’s refusal to take a firm stance against racism.  Spike Lee, who had recently complained about being harassed by James Dolan and accused Dolan of denying him entrance to Madison Square Garden, explained how James Dolan choosing to remain neutral regarding racism, helps to preserve racism.

As of this writing, there remains no resolution.  The saga continues.

We need change now. The outpourings of grief and generational pain we’re seeing today are a response not only to unjust policing of Black people — they are a cry for public officials to take action and achieve a new paradigm for policing. We cannot go through this cycle again. Now is the time for all of us to demand justice for the Black community and accountability for law enforcement. It is time to re-imagine what kind of America we want to build — an America where all people can live safely and freely.

Take a look at The Leadership Conference Education Fund’s New Era of Public Safety report and toolkit to inform your advocacy. The New Era of Public Safety initiative offers groundbreaking tools to increase trust, fairness, justice, and mutual respect between police departments and the communities they serve. The report and toolkit offer community-centered policy solutions to equip communities and police departments with best practices and recommendations for adopting 21st century policing models, including tools for advocacy.